One year has passed since I decided to drop my Nikon DSLR system for the Olympus MFT system. Never have I made a better decision in my photography career. I have enjoyed every minute working with the new system and have never looked back. 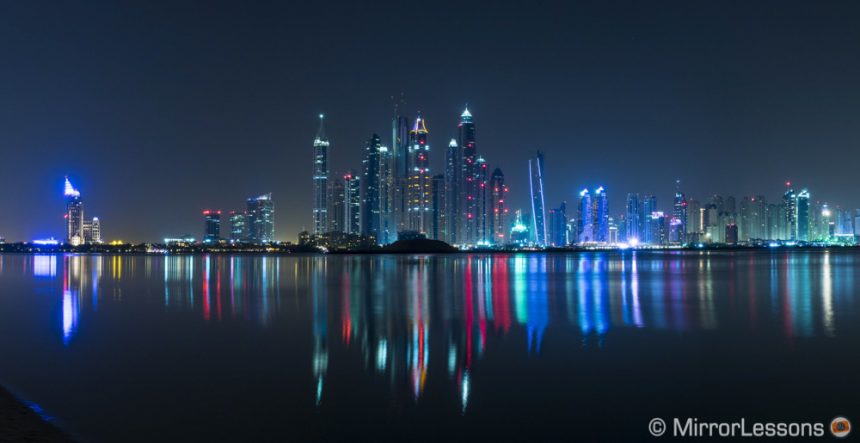 The reasons for my decision to switch are many. Some of you might know me through my blog MirrorLessons where I have already written different articles about using the system for work. Of course the fact that I run a blog that focuses on mirrorless cameras might lead people to think that this decision of mine was influenced by my work for the website, and I won’t deny that in part this is true. When I first bought the E-M5 I didn’t think about using it on assignments. I gradually changed my mind while reviewing the camera and regularly shooting with it. I realised that its capabilities could suit my job very well while giving me the advantage of carrying something much lighter than my full-frame DSLR system.

Following the addition of the E-M5 to my set-up, I slowly upgraded all my gear. It took several months for me to totally switch because I wanted to be 100% sure. I don’t think that rushing decisions like this is a good thing. It is best to start by using the new camera as a backup/second body. When and if you are ready, you can then promote it to your main camera on the job. It is a very personal choice, and cannot be made lightly.

In May this year, when I worked for 5 days in Dubai, I realised that exactly one year had passed since the switch. I also realised that no better assignment than this one could sum up why this system is the best for events and travel photography. 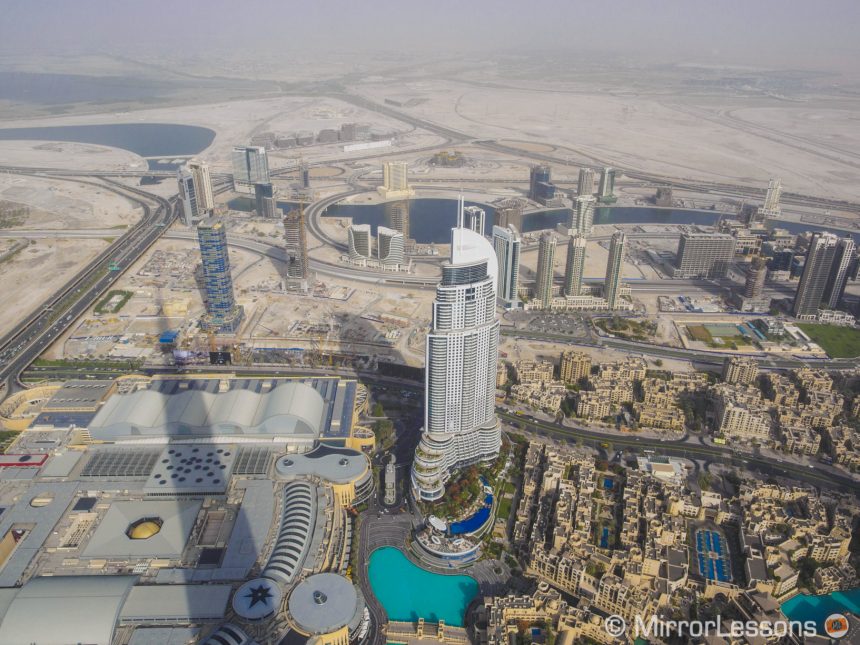 I went to Dubai to shoot a reportage for a Business Incentive trip hosted by an important private Italian bank. I had done this type of work before mainly for the Sky TV network. Basically what happens is that the company brings its best sellers and managers on a trip to a very nice location. There are meetings, seminars but also free time and guided tours. This time the trip was quite long and there were around 350 people invited.

My job was actually very simple: to document every step of the journey, from the departure at the airport to the gala dinner that took place on the last night. More importantly, the pictures had to show people having fun. Catching smiles and emotions but also formal moments was key to bringing home a great reportage that the clients would appreciate. There were also award ceremonies, always at dinnertime, where the CEOs would award the company’s best sellers. These moments are usually the reason why the client wants a photographer in the first place. So if is there one thing that you cannot miss as a photographer, it is those 15 minutes per evening.

Please note that for privacy reasons, I cannot publish shots of people, so I will mainly use ambient pictures that show the location and the general atmosphere.

The gear that I brought with me: 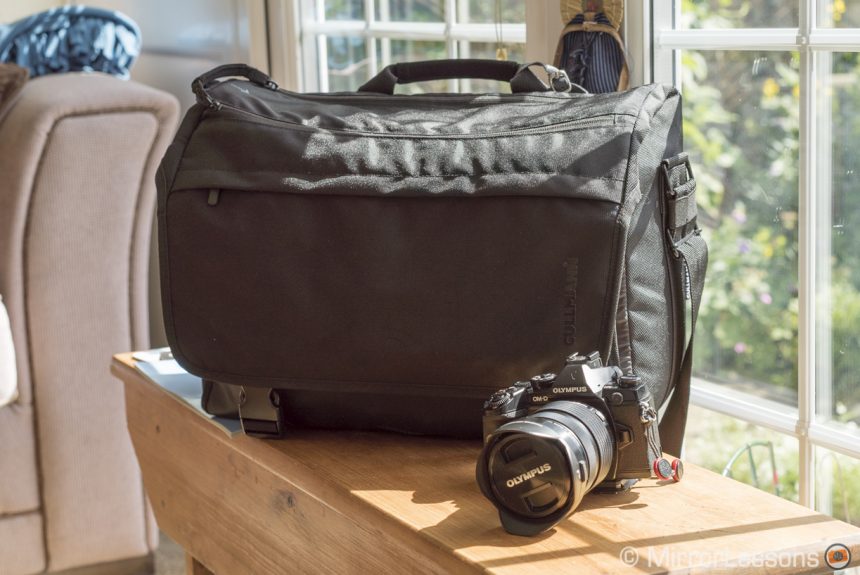 The first advantage of working with a system such as MFT is that all the gear listed above (2 cameras, 5 lenses etc.) fit inside a nice Cullmann Atlanta Maxima 430+ bag (360mm width). With my old system I would have had to rely on a much bigger Lowepro backpack (Pro Runner 450 AW), resulting in a much heavier set-up.

The days were divided into two big events: during the mornings there were meetings and short seminars hosted by several client partners. I had to shoot the crowds in the room and have at least two or three good shots of each speaker. I used the 12-40mm for all the wide shots and mainly the 75mm f/1.8 for the middle and close-up shots. I was free to walk around the room, so that helped. I never used the flash as the light on the stage was good enough to stay at 800 ISO and 1/200 sec shutter speed to avoid any blur. I almost always used the 75mm at 1.8 because the lens is very sharp wide open and I wanted to isolate the subjects from the background. There is less depth of field in comparison to my old DSLR system and this is why I brought the 75mm with me. 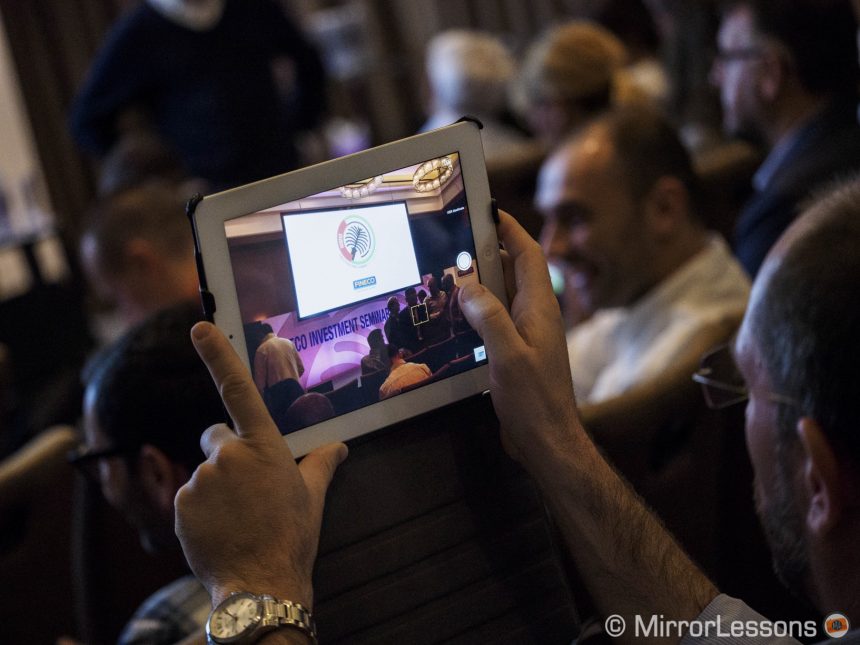 All the mornings were the same and pretty easy to cover. During lunches and free time (which I had almost everyday, very unusual for this kind of assignment) I took some environment shots of the hotel, the beach, the restaurant and other interesting places. 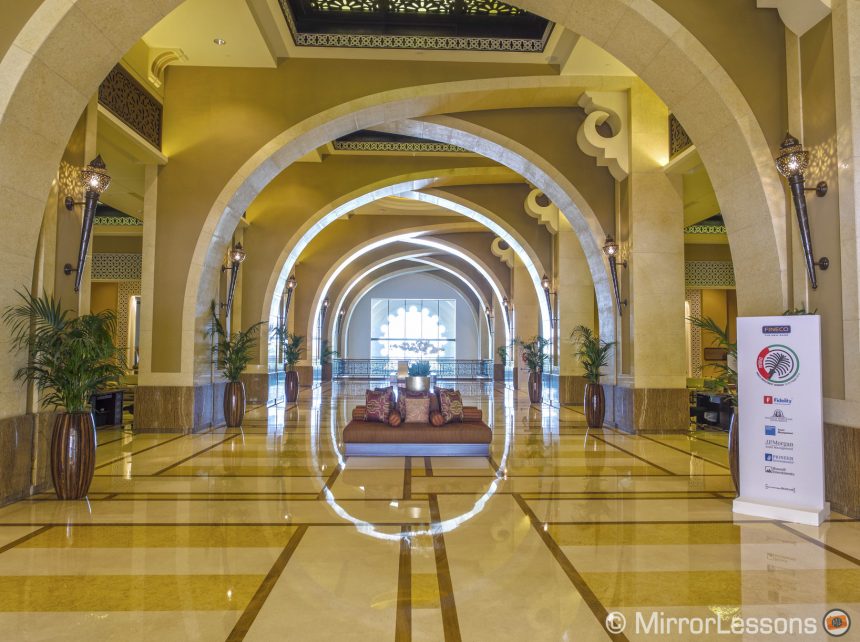 The afternoon was devoted to guided tours around the city. We went to the Dubai market, the Dubai Marina and the Burj Khalifa tower, which is the tallest tower in the world. 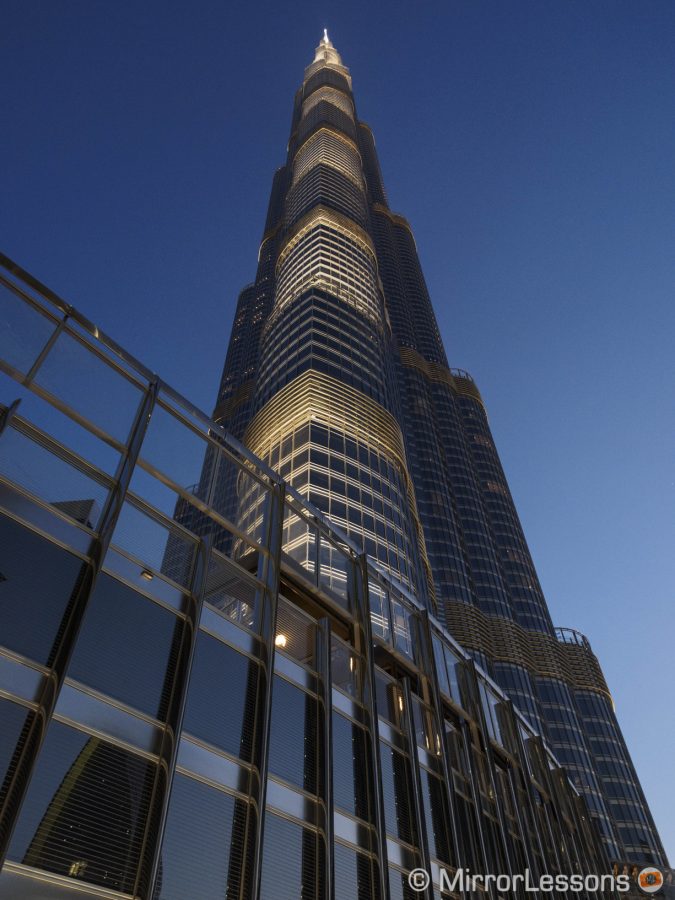 For all the outdoor excursions I brought the E-M1, E-P5, 12-40mm, 25mm and either the 45mm or the 75mm with me. The nice thing about this set-up is that I didn’t need any bags except the Cosyspeed Camslinger 160, which is a small belt bag, with the small Lensbag and Stuffbag attached. In there I had the E-P5 with one lens mounted and another lens stored. I kept batteries and SD cards in the Lens and Stuff bags.I kept the E-M1 around my neck or shoulder. I had the Tyson Robichaud strap on the E-P5, which I mainly used with the 25mm or a portrait lens to capture some faces or nice details. 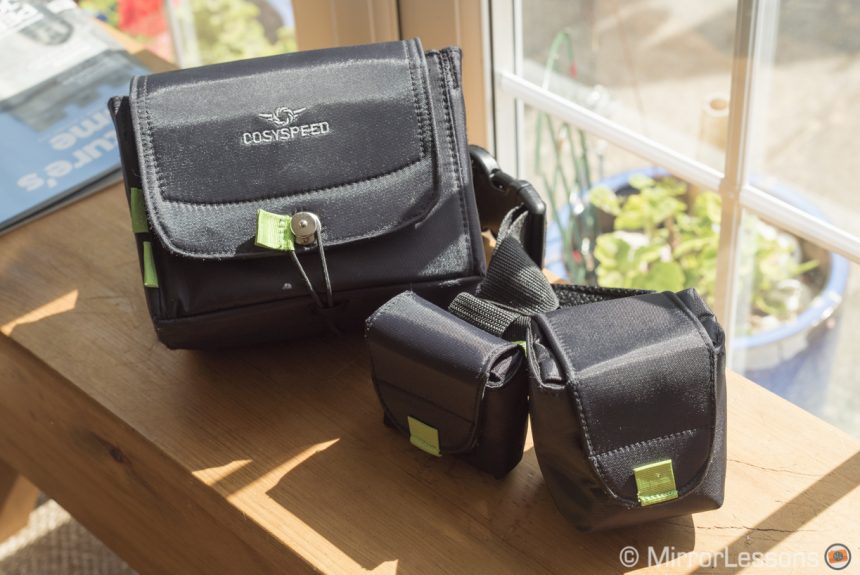 I couldn’t imagine doing the same job with another system without using at least a shoulder bag or backpack. Certainly with a DSLR I could have brought fewer lenses, but isn’t it better to have the freedom to walk around with a varied set-up that weighs less than a full-frame DSLR and two zooms? It actually became sort of a lifesaver for the third day, when we spent the afternoon right in the middle of the desert.

After one hour of driving over the sand hills with 70 different SUV cars, we stood for two hours waiting for the sun to go down. These two hours were one of the most important moments of the entire trip. I had to take as many pictures as possible of people either posing for me or just having fun with each other, joking and taking selfies. I walked for two hours under a 43°C sun, up and down the sand hills to cover 350 people having fun. And I did all this with just two cameras, four lenses, a small belt bag and most importantly, zero fatigue. The results in image quality terms would have been the same with my old D700, 28-70mm 2.8 and 80-200mm 2.8 but I would have arrived at dinner completely destroyed. 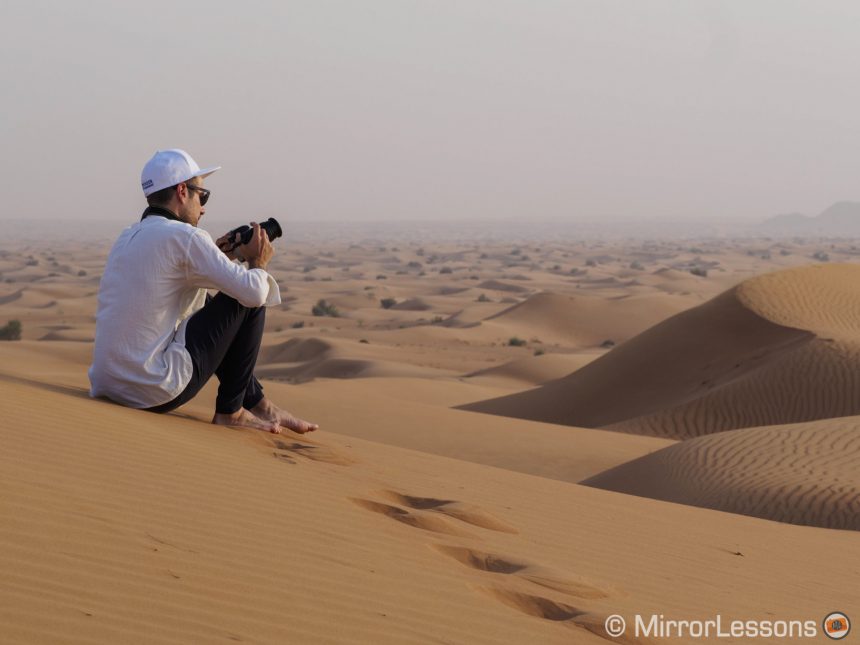 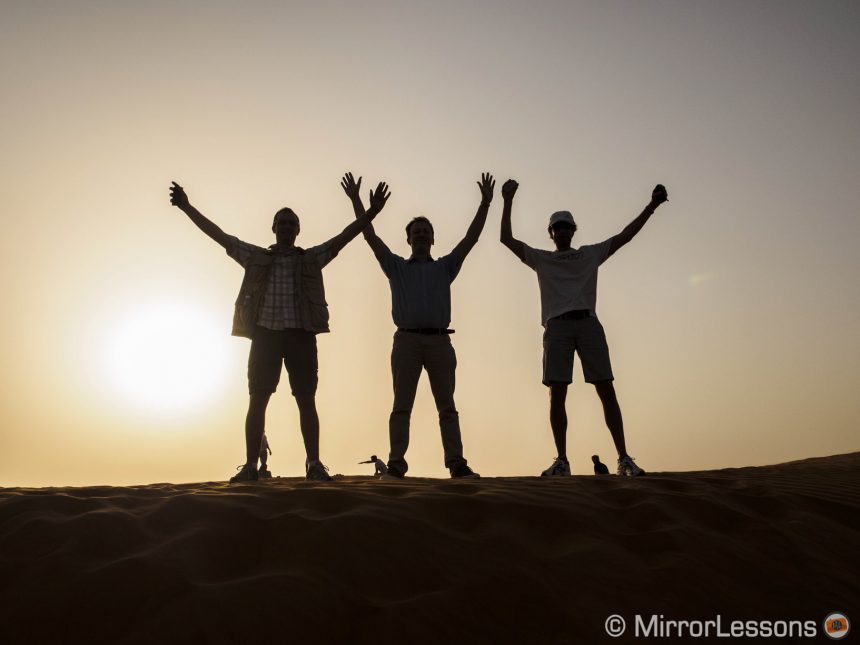 After the sunset we ended up in a very nice location in the desert for dinner. After the usual shots in more difficult light conditions, we headed back at around 11pm. Before entering the car, I quickly ran up a hill to take a wide shot of the location. My tripod stayed at the hotel because I knew I didn’t need it for shots like this one. The 5-axis stabilisation built into the E-M1 was more than enough and this is another aspect that I would have difficult shooting without now. It really helps. 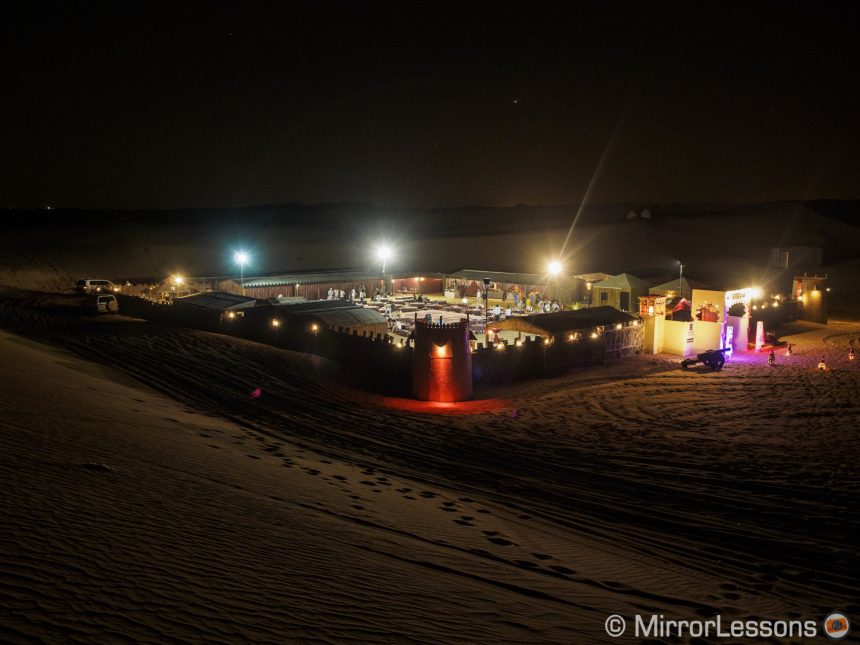 During the gala dinner which took place at the bottom of the Burj Khalifa tower, a selection of almost 200 photos were projected on a giant screen during the dinner and before the final (and most important) award ceremony. 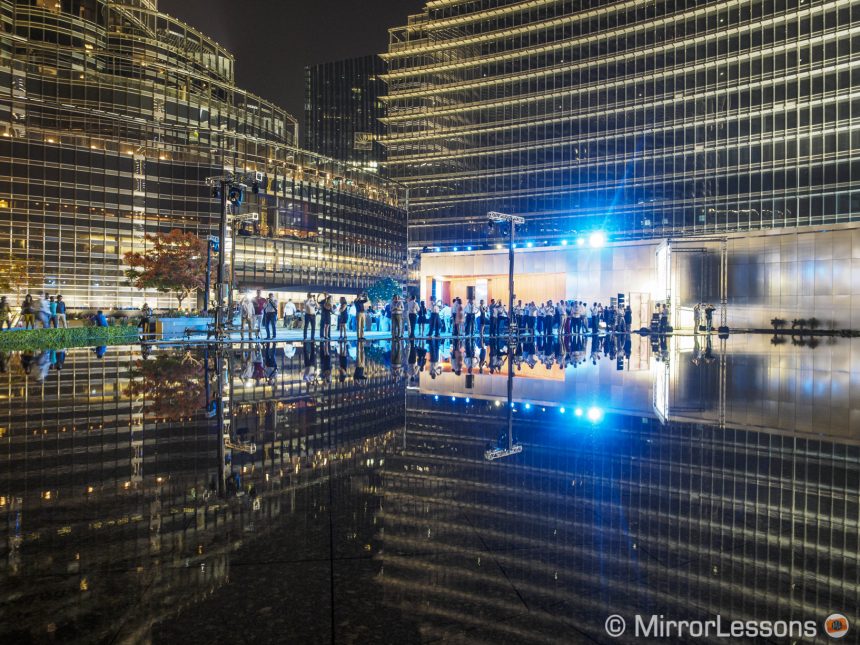 I returned to Italy with thousands of pictures but the only real post-production job I had to was to make a good selection. 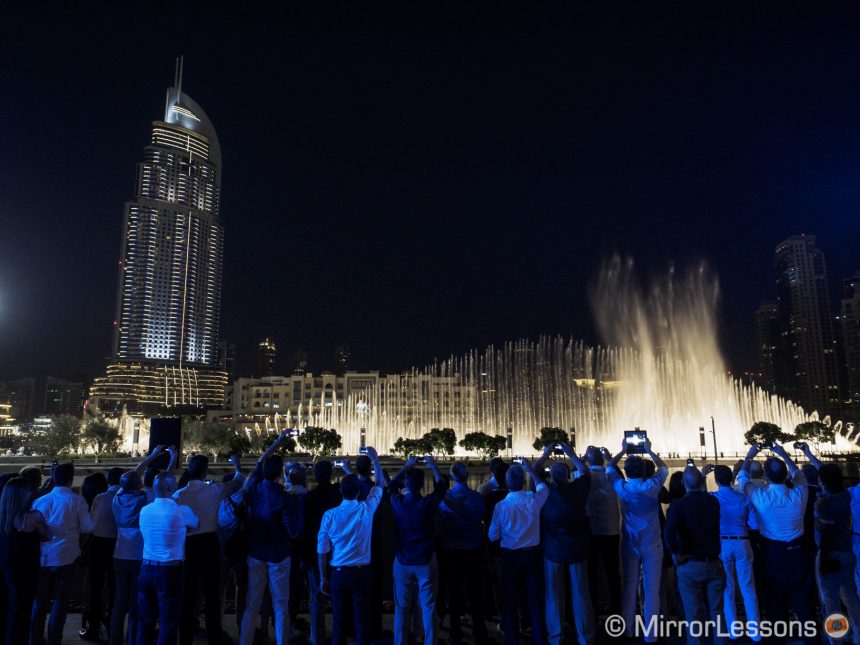 Were there any drawbacks? Only one and while it is a minor bug it is worth mentioning. The OM-D E-M1 can sometimes suffer from “specular highlights” that can confuse its autofocus system. For night shots where there are small spots of lights in the background (building lights for example), the camera may take a pictures that is blurry even though the camera has given a positive AF lock. It is nothing dramatic but for certain shots like the one below it is better to check the picture (chimp) to be sure. 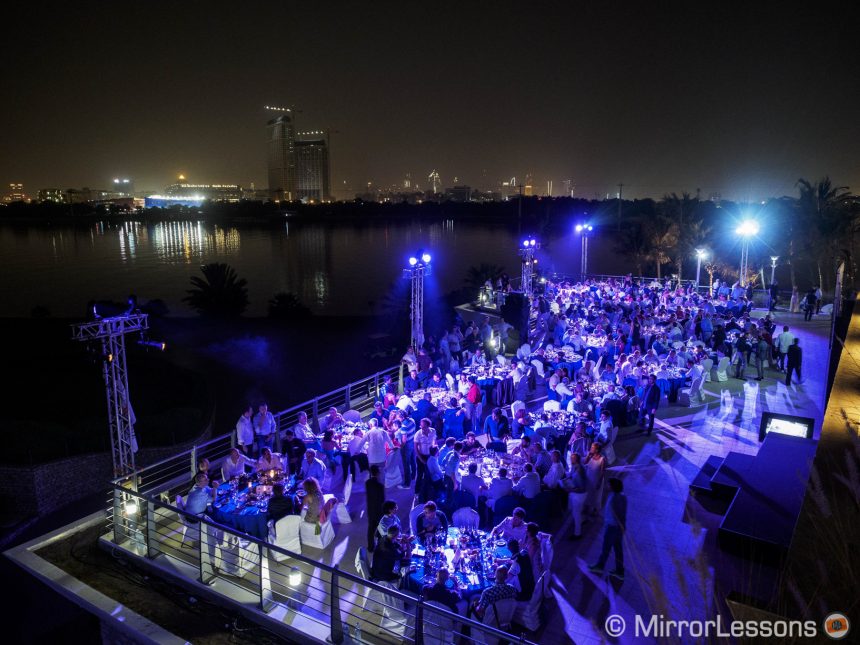 This is the only complaint I have. In every other situation the autofocus worked perfectly, and that includes taking shots in near-dark conditions with people dancing at a disco, using the AF lamp. The AF was quick to focus and lock, and actually one of the best shots of the entire trip was taken that first night. Again unfortunately I cannot show you much. 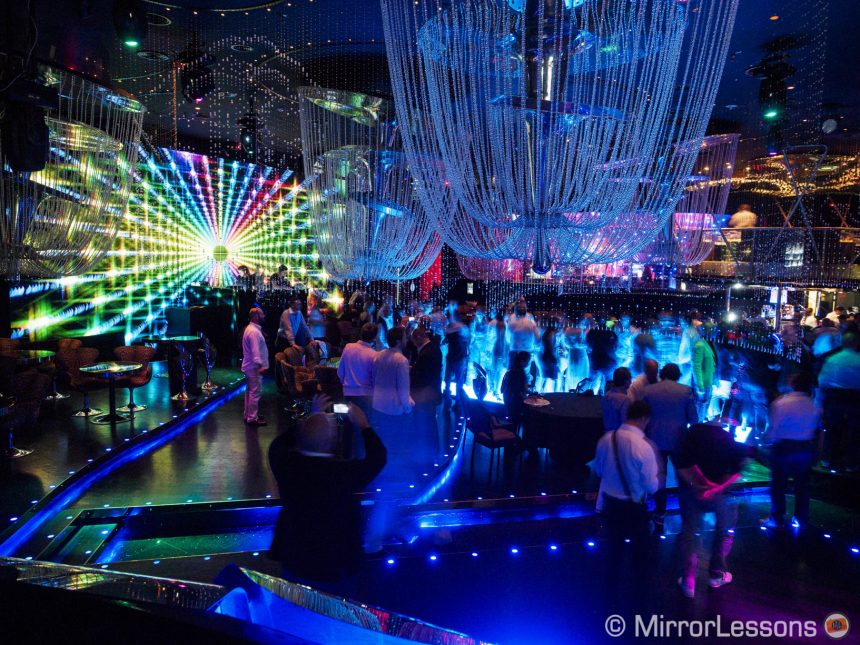 There are pros and cons for every system out there and no camera is perfect. There may be many reasons to stick with what you already own or to consider other systems. From a professional point of view, I really think that the Micro Four Thirds system suits events just perfectly. There are great photographers out there that use OM-D cameras for street, wedding, fashion and other genres but the system’s main strength – which is being compact and lightweight – can really add something to the way you shoot and approach events photography.

Finally, let me mention something unexpected that happened during the last dinner: I received compliments from the client in person. One of the things that they appreciated the most was my discretion – actually almost no one noticed me during those five days. Receiving compliments for the job you just did is always nice but in this case, I think his words have even more significance.

My adventure into the world of photography began during my childhood. My parents gave me a Yashica fx2000 that I accidentally broke during a holiday in Rome. Growing up, my interests changed, only to return upon completing three years of cinema school in France. Over the years, photography turned into a profession, and the website MirrorLessons that my partner Heather Broster and I created became an outlet for my creativity. I haven’t settled on a favorite genre as of yet, but to travel and photograph are definitely the two things that make me feel “free".

Connect with Mathieu Gasquet on: